Rarely has there been a more clear-cut case of free-market economics than in the blockchain cyberspace. For example, the decentralized finance (DeFi) industry has grown to $80 billion in total value locked (TVL) during 2021 from next to nothing a few years ago, due in part to the absence of regulations. Moreover, that number is projected to increase to as much as $800 billion in 2022.

So without further ado, let’s look at how three high-flying cryptocurrencies can add wealth to your portfolio. These altcoins — meaning crypto other than Bitcoin — are Ethereum (CRYPTO:ETH), Cardano (CRYPTO:ADA), and Binance Coin (CRYPTO:BNB), respectively. In the past four years, ETH — the biggest of the three — has gained more than 1,000%, Cardano has returned almost 9,000%, and finally, Binance Coin takes the podium with a mouth-watering return of more than 32,000%. 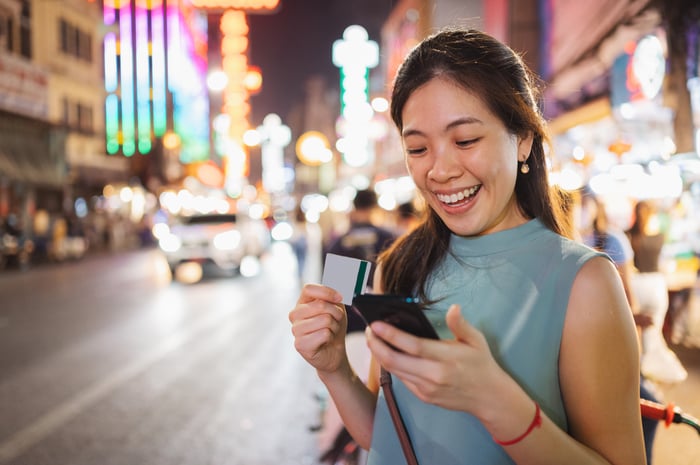 Ethereum is the blockchain of choice for developers to build decentralized applications (dApps), or apps that run on peer-to-peer networks instead of central servers. More than 2,845 dApps utilize Ethereum, ranging from social networks to online gaming to media outlets to decentralized exchanges (DEXs), where users can trade crypto assets. Ethereum dApp users generate almost $200 million — or $67 billion annualized — worth of transactions every day.

Ethereum will transition away from the energy-hungry proof-of-work (PoW) protocol to proof-of-stake (PoS) by the end of next year. This will allow coin holders themselves to validate transactions by pledging their ether and earning interest for doing so instead of needing to operate mining rigs to find the correct hash to validate transactions. The move, Ethereum co-founder Vitalik Buterin estimates, could reduce the network’s energy usage by as much as 99%. Furthermore, Buterin plans to expand the functionality of Etherium’s smart contracts — self-executing agreements triggered by certain events — via so-called oracle tokens like Chainlink, which can access data from outside a blockchain and allow more specialized dApps to be built. For these reasons, I think Ethereum is an exciting crypto that you don’t want to miss.

On Sept. 12, Cardano’s long-anticipated Alonzo Fork finally went live, enabling smart contract functionality on its blockchain. With this move, many investors believe that one day Cardano’s $75 billion market cap will surpass that of Ethereum’s $400 billion. Skeptics, however, argue that Cardano is overvalued because there are only 150 or so projects and dApps in development on its blockchain — a tiny fraction of the thousands on Ethereum.

But with the industry changing every couple of years or so, Cardano stands a chance. Cardano already operates on a PoS protocol, it can process more transactions than Ethereum, and it has lower network fees. In addition, Cardano developers are focusing on the non-fungible tokens (NFT) industry by building infrastructure, such as marketplaces. For example, the top NFT marketplace, OpenSea, attracted more than $3.4 billion in trading volume last month alone; so there’s definitely a lot of potential for Cardano to make inroads in the market. Consider adding this promising coin to your portfolio.

Binance Coin is the native digital currency of Binance, the largest cryptocurrency exchange globally, which on average processes $29.7 billion in trades each day. At its launch in 2017, one could only use Binance Coin to make peer-to-peer electronic payments or use it to pay trading fees on the Binance exchange. But its utility has exploded in recent years.

Meanwhile, users can build dApps on the BEP-20 network, and BEP-20 tokens are used in the smart contract interface. Total value locked on BSC has eclipsed nearly $20 billion on the Binance Chain alone, with one-third of the volume coming from PancakeSwap, a popular DEX.

Don’t be dismayed by Binance Coin’s $60 billion market cap. In addition to BEP-2, the value of DeFi projects on BEP-20 has surpassed $23.8 billion. What’s more, Binance buys back its coins with about 25% of its brokerage profits each quarter. That reduced the supply of Binance Coin by 1.3 million in the second quarter. Supply has fallen to 168 million from 200 million during its inception, leading to scarcity and higher valuations. This is an up-and-coming cryptocurrency that you don’t want to miss.

Opinion: Buying bitcoin or any other crypto is a huge leap of faith and you don’t want to be the ‘greater fool’

Top cryptocurrencies that can become Bitcoin of the future